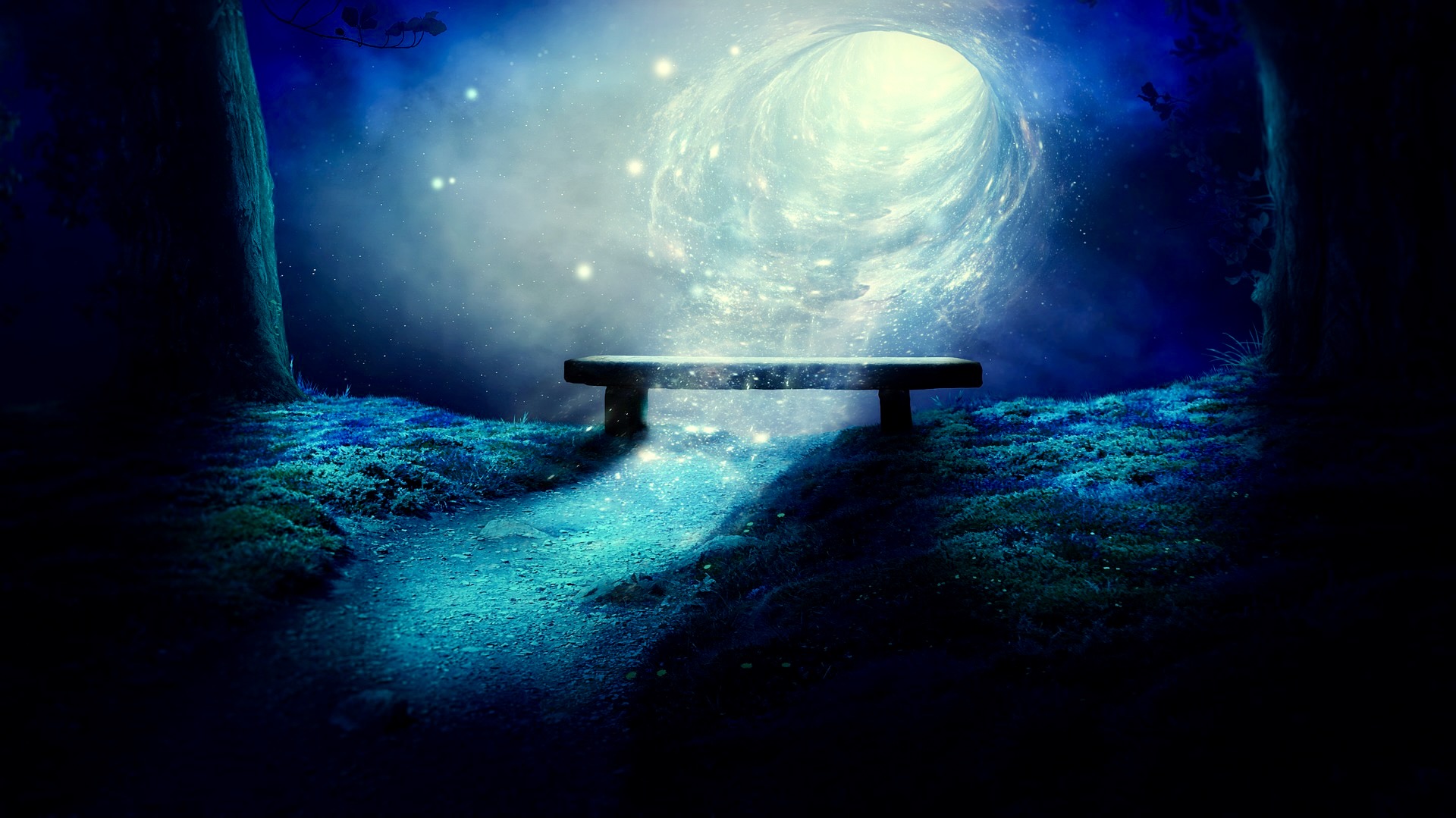 I waited for the Lord on a bench at the park when a portal opened to me. I looked inside this portal to see worlds and stars crafted by God. I walked through; my encounter begins.

The heavens opened above me revealing a lightning storm unlike anything I have seen on this earth. Flashes of blue lightning and dark clouds surrounded me. I could smell the burning of fire and electricity as this storm formed around and above me.

Then, with a gush of wind, the clouds and the storm moved away from me, revealing a large angel! He was metal…every metal of the earth, gold, silver. There was heat coming from his body. This angel had multiple wings that were like stones, diamonds, sapphires, emeralds, rubies and many more that covered the shape of his feathers. Two wings were high above him like an arc forming above his head, and the other two were lower to the ground and folded slightly around his legs.

This angel stood 20ft tall! He was mighty with curly hair that reached the lower end of his legs. I could see that his hair was also metal, silver, gold, and stones from the earth! Yet his hair flowed like it was under the sea. This angel looked forward, holding a scroll of light as if he saw something in the distance that he could not turn from.

Slowly, he looked down at me with a focused stare. With eyes like lightning, he spoke to me, “I am Metatron, I keep watch of the voice of the Lord. Your God has fashioned me to watch and record the activity of angels in the heavens and beyond. I look, see, and record.” He flicked his fingers, forming a spark of fire that created a pen. Then with his left hand he opened the scroll and the dimensions of the spirit world opened up to him. Each dimension was in a language that spoke of the angels’ works in those realms. The angel read all their works and recorded them on his scroll! He was focused so intensely on his work that it appeared he was mumbling to himself the words he was to record.

I wanted to ask his name, but I did not want to disturb his work. I waited in the presence of this created celestial being, when suddenly I heard the sound of thunder roll in from a distance.

Father God was coming to speak to us. The clouds wrapped around the Lord like a garment and light shone above his head like a crown. Father carried the power of the mountains, the grace of the river, the gentleness of the wind. Father’s very countenance dripped with glory like a rainbow! Father’s white hair sparked with fire and his face colored with honey gold…he smiled at me! He has come!

Father spoke as he approached the great angel, “Metatron, harken to me.”

The angel’s gaze turned to his creator, and he bowed before the Lord. Father said, “ I am the maker of the heavenly spirits and the judge of the wicked ones. I bestow power, rank, and majesty on those who humble themselves before me.” Father placed his hands on Metatron, the angel who records the events of the spirits. Slowly, Father opened his mouth, revealing fire deep within himself like that of a volcano ready to erupt.

Quickly, Father roared with so much authority that the dimensions lit up like a million suns. Father said, “ I am the voice of the Lord. My voice you must obey, Metatron. There is coming a day when the spirits of the humans will join together with my son in holiness and love. You must record–you must write to the other domains of the spirit world so that they would prepare for the coming sons of God.”

Father released fire over the angel’s body, and within a fiery whirlwind, Father commissioned Metatron with the power of HIs spirit. The flames of light and gold danced around the angel’s wings and arms–they entered his mind to shift his thoughts to be the one who will fly to the other realms and tell them of the coming sons of God who will rule and reign with Jesus.

Father said this, “And you will be seen among the nations of the earth as one who flies over the earth carrying the gospel in your wings. Until then, write, Metatron.