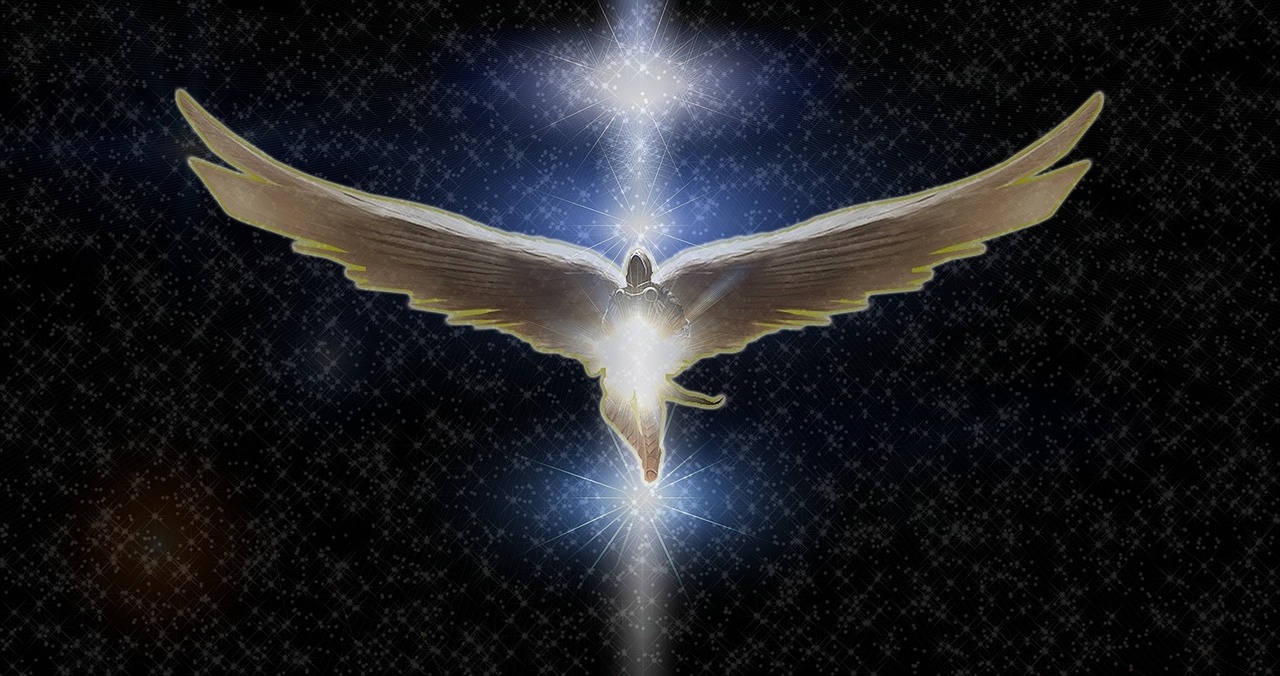 “Hello” The angel greeted me, “I think you asked for an interview with me.” He smiled knowing that I was asking Holy Spirit to interview Angels. I was hungry to learn more about them and understand their job as far as people and those they are given to protect.  He smiled warmly, as friends do when they play around.

His name is Eden; He has protected me since I was a baby. He used to come to me in dreams and tell me about a great, big castles Jesus lives in and that one day He will take me there. Eden, being a large angel with curly black hair like mine, is very kind to me, but also stern when it comes to doing what is right. He was the first angel I met and the one who will always remain with me until I go home to heaven. We are friends! He is a guardian angel with large ember wings and a green sash around his chest. He stands about eight feet tall and has a great singing voice. When he comes to me his wings sound like wind chimes. His white robe is glorified with flashing lights of emerald-green. His complexion is brown like mine, but I can see purple embedded into his “skin.”

I stood up to greet him, and he looked slightly amused by the gesture, “I have been watching you since you were a baby Micah. I remember when your mother changed your first diaper. I cheered with them when you walked, we are more than acquaintances.” He placed his right hand on my shoulder, “Please, I am your friend!” He sat down in my red chair with his wings resting on his lap. “Well, I guess I will talk first then?”

I stuttered, “Well, I just wanted to know, how do you get assigned to us?”

He held his chin, “Michael is involved in the selection process with your Father. Angels are carefully selected by our Holy God to best fit the child’s growing process and the overall ministry of their life. Other angels will come later, but those are ministry angels only given to you for ministry purposes. We, guardians, see the good, bad, and ugly. We are also the ones who sit with you when you are hurt. Your Father loves you very much and wants you to have the best care. So, the moment you enter your mother’s womb, we begin our assignment.”

“It says that angels encamp around those who fear God? What about those who do not know him?”

He sighed, “Well we wait next to them. Hoping and praying that they would come to light. Sometimes we intervene on behalf of those who pray for the lost one. Moments of happiness and joy we give just to draw them into the love of the Lord. Yet, because they have not confessed their sin and walk in repentance, there is a lot we cannot do based on their free will. As a result, it is dangerous for us to remove demons only for them to return with more.” He paused, “We hope and depend on the Lord.”

I searched for a weapon for him to carry, “What do you use to fight with?”

He clutched his fist, “I use my hands. I wrestle the demons who try to touch you and sometimes I will wrestle with your spirit when you walk in disobedience, this is the job that the guardians do as well. We help cultivate obedience in you. So, that means we deal with the attitudes and temper tantrums when you start dying to the flesh.” He laughed, “You are a good workout for me.” He winked while he clicked his tongue.

It wasn’t that funny…but he thought it was. I changed the subject. “Do you think we could make your job easier?”

He pulled out some bread from his pocket to eat, “You can stop thinking you are dead. You are no longer dead—you are alive in Christ! We spend so much time trying to get His children out of the tombs and start thinking about their new identity. Sometimes demons are attracted to tombs, so we have to fight them off too.”

He saw I had no idea what he meant so he explained, “Tombs are old religious ways or dead thinking that were buried with Christ. You are made new so get up out of the grave like Jesus did walk in the new!”

“Did Jesus have angels to guard him too?” I wanted to know if Jesus had the same relationship as we do with angels.

Eden raised his eyes brows, “Yes he did. He needed them to come and minister to him on several occasions, that is what is written, but there are times unseen that angels blessed him also without others knowing. The Son of God knows you!”

He took a bite of his piece of bread and then offered me to eat, “You want some?”

“Yes!” I shouted, “I have never eaten angel food before.” I was excited!

He smiled, “You know what is rewarding about our job?” He added while breaking bread, “We watch you grow and become! Even though we walk through the troubling times with you, and sometimes more than once, we get to see you grow into what He has always designed you to be. Until we bring you home, we will stay here encouraging you in your Father’s love!”

He gave me some bread and disappeared…